All Set for Standing Beach ParaVolleyball

WillowWood’s guest blogger, Chris Seilkop, is a long-time friend of ours.  We’ve been on some amazing journeys with Chris and are delighted to hear about his latest endeavor.

As a guest blogger, allow me to introduce myself and share a brief background. My name is Chris Seilkop and I lost my right leg below the knee at the age of seven in an accident with a riding lawn mower. I was very active in sports growing up. In 1990, while attending the University of Central Florida, my prosthetist introduced me to Ohio Willow Wood components. This started a partnership with WillowWood that over the years allowed me to push my athletic limits and excel at the highest competitive levels wearing the Pathfinder® Foot and Alpha® Liners. In 1996, I was the starting middle blocker for the USA Standing Volleyball team at the Atlanta Paralympics. In 1998 and 1999 I was voted best blocker in the world. In 2000, I represented the USA again at the Sydney Paralympics.

Unfortunately, the Sydney games would be the last Paralympics for standing volleyball. Over the past few years, though, there had been rumors of a few counties trying to get the standing game active on the beach. Earlier this year I found out about a tournament that the ParaVolley Asia Oceania (PVAO) organization was going to put on in Thailand.

I contacted a few of my old teammates about forming a team. To be honest, I was very nervous about the idea of playing beach volleyball. At the age of 45, I don’t have the ups I once did and years of sports and jump training has taken a toll on my knees. Growing up on the beaches of Daytona, I was familiar with the game. However, it has been decades since I played in a beach tournament and now I could be up against players probably more than half my age.

On the Beach
With the help of WillowWood and other generous sponsors we were able to raise the funds to attend the Pattaya 2015 Para Beach Volley Standing Challenge Cup held from Oct. 26-29, 2015, in Pattaya, Thailand. This was the first major international beach standing volleyball tournament. It is my hope, and that of the organizers, that this tournament will give momentum to the beach volleyball discipline. In the twilight of my volleyball career, I want to help get this sport going so future athletes will have the same opportunities I experienced.

There were seven teams from six countries: Germany, Poland, Kazakhstan, Laos, the United States, and two teams from Thailand. The format was three man, with one person on the net and two playing defense and hitting. We played two matches a day with the heat index hitting 104 degrees Fahrenheit. It was a learning experience for our team. It was the first time we had played together since 2003. Plus, we didn’t practice for this tournament until we met in Thailand. As the tournament went on, the team adjusted and we made it to the finals against a team from Poland that has been playing together on the beach for 10 years. It was a tough match and we fell short 19-21 and 20-22.

Looking forward
The ParaVolley Asia Oceania region plans to host two beach tournaments in 2016 and we want to be able to field two USA teams for each tournament. We need to identify possible players. If you know of an athlete interested in playing standing beach volleyball, please contact me at USAV15@yahoo.com. Videos and pictures from the tournament can be found at the ParaVolley Asia Oceania Facebook page. 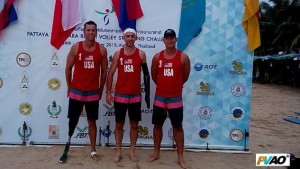 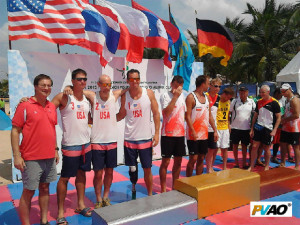 2 responses to “All Set for Standing Beach ParaVolleyball”