With all of the excitement over the Paralympics this summer, several of our recent blog posts focused on athletes. While their stories are fascinating, we know that there are also plenty of interesting stories out there among the rest of us who aren’t likely to find ourselves on a medal stand. Here is one of those stories.

One day in 1979, 14-year-old Kevin Johnson got off his school bus and climbed aboard a combine to harvest soybeans on the family farm in central Ohio. As he attempted to free some vines that had gotten stuck in the machine, his shoe string got caught in the auger. Ninety minutes later, his dad found him and had to drive the combine across the field (with Kevin still caught inside) to get help. Despite being trapped for so long, Kevin survived. But he lost his right leg above the knee.

While Kevin was in the hospital, he received numerous visits from local sportscasting legend and philanthropist Jimmy Crum, who worked tirelessly on behalf of organizations providing sports and recreation opportunities for the mentally and physically challenged. Jimmy also introduced Kevin to a young girl born without arms or legs. After seeing how happy the girl was, and listening to the jokes that she told, Kevin knew that his one missing leg would not be a problem.

Fast forward to today, where Kevin flies helicopters and airplanes for American Eagle Air, Inc. The types of missions he flies include aerial surveying, aerial photography, animation observation, sightseeing, Make-A-Wish trips for terminally ill children, and fundraisers. He also donates flights for causes that are near and dear to his heart, such as a recent event for a Congressional Medal of Honor recipient.

Clearly his amputation has not held him back. He counts on his current prosthesis, consisting of an Alpha DESIGN® Liner, a Duralite™ Foot, and a hydraulic knee, to help him not just on the job but also in an impressive array of other activities – roping cattle, riding his motorcycle, riding a jet ski, hunting, hiking, playing with his grandkids… the list goes on!

One of his favorite things to do in his free time is to fly to schools and special events to give motivational talks. In fact, he dreams of finding a sponsor to help him do even more of these talks, to share his experiences with children and with Wounded Warriors. His message is simple but powerful: “Barriers are just something for YOU to tear down. There will always be challenges whether you are an amputee or not; you just have to look the challenge in the eye and overcome it!”

Kevin feels he owes a debt for his life being spared on that day back in 1979. Through his charitable flight missions and inspiring speaking engagements, he seems to be well on his way to paying it off. 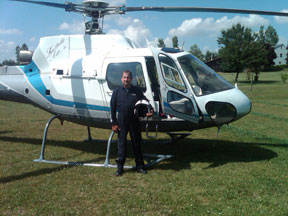 One of Kevin's joys is flying to schools for career days. He blends in a message about overcoming life's hurdles.

Kevin pilots airplanes, like a Cessna and many other models, but helicopters are his absolute favorite.