We’re sharing some healthy (and yummy) recipes from athletes sponsored by WillowWood that help fuel them during their training and prior to competitions. Dig in!

When there isn’t snow in Tahoe, you can probably find Brent out rock climbing. But when the snow is flying…you’ll have to look up in the mountains for Brent and his snowboard! Brent has been an avid snowboarder for years. Recently he’s been an active (and successful) force in having snowboarding recognized by the International Paralympic Committee and included in the 2014 Winter Paralympics. Now Brent gets to have fun coaching athletes aiming to qualify for the Paralympics!

Brent loves to cook and likes to stick with what he knows before anything stressful or serious like the X-Games or World Cup competitions.  Brent says the key is good, basic food that your body knows and can readily convert to energy. Being vegan Brent usually opts for something home-cooked and easy before competitions or training schedules.

“I like burritos with rice and beans for total proteins. You can add whatever your body is craving or whatever sounds good,” says Brent. “You’ve got yourself something substantial to power you through your next day.”

Cook beans in a pressure cooker – whole beans can go from dry to burrito-ready in about 20 minutes at 6500 feet and 25 minutes above 8000 feet. Depending on the size of the pressure cooker you can make brown rice with the beans in the same pot or make it separate on another burner. Brent usually doesn’t bother cooking the burrito fillings in order to leave as much nutrition in them as possible.

Brent likes basic stir-fry for its ease and convenience and says that stir-fries are about as easy as it gets for good nutritious food.

Put a pot of rice on and start chopping your desired vegetables as well as the tofu or tempeh that you’re going to put in with the rice. Once the rice is done cooking, remove it from the burner to cool. Fry up the vegetables and tofu or tempeh while the rice is cooling down.  Brent likes to use a cast iron skillet for this part, but if he’s making food for more than two, he’ll break out the wok.  Once the veggies are starting to wilt combine the rice and the “good stuff; top with a little soy sauce and you are eating!”

Brent Kuemmerle at the start of the X Games...ready to go! 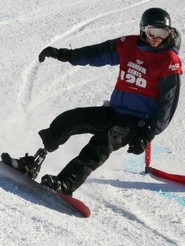 Brent snowboarding...what's he wearing on his foot?

"The golf shoe is how I ride," shares Brent. "I’ve been on a golf shoe for the last four years now and love it. Lets the Pathfinder do its work without damping everything by putting it into a boot that doesn’t fit particularly well around a prosthetic."